Only a few years ago, during plenty of printing symposia, each speaker argued that oxygen inhibition at exposing flexographic plates has a salutary influence on the quality of the elements mapped on it. Sharpening the dot tops, minimal differences in the height of elements on the printing plate, e.g. lower fine dots relative to solid areas had to result in a correspondingly greater pressure in printing while at the same time delicate printing of tiny raster dots. But it’s past…

Today, the Development Departments of polymer plate manufacturers are competing to find a way to produce a polymer that will be characterized by the so-called flat-top dot The same speakers convince us that their plate has this dot flatter than the other speakers.

What’s the truth? Of course, a flat dot on the flexo plate can be obtained with more or less success in various ways, for example by an additional technological process, i.e. laminating the plate with TIL / Thermal Imaging Layer / or by exposing the plate in the appropriate gas environment or by exposing the polymer to strong and stable LED light. All these techniques pass the exam but this is combined with an additional machining process in the technology of creating a printing plate or with a significant investment in equipment, such as exposing units with the gas environment or appropriate lasers with LED strips.

The Japanese company TOYOBO, however, decided to create a raw material, a polymer – a flexographic plate, which in its construction will prevent oxygen interference in the process of exposure, excluding the effect of oxygen inhibition. Both manufacturers and distributors of polymer plates know how difficult it is to produce a new raw material with breakthrough properties. It is no mean feat that it would be stable in the printing process and could be called a product of the New Generation. The company after a successful premiere of QS plate in the 1.14 and 1.7mm versions in the market in 2012, only in 2015 was ready to show the QZ plate. And in 2018, the same plate in the new version was called the New Generation water-wash flexographic plate. This only shows how labor-intensive and difficult it is to produce a new polymer.

QZ114 New Generation plate is a breakthrough in flexographic technology because, in its structure, it has a unique layer that effectively eliminates the phenomenon of oxygen inhibition.

Oxygen effect on a dot in a standard plate and QZ plate with an oxygen barrier. 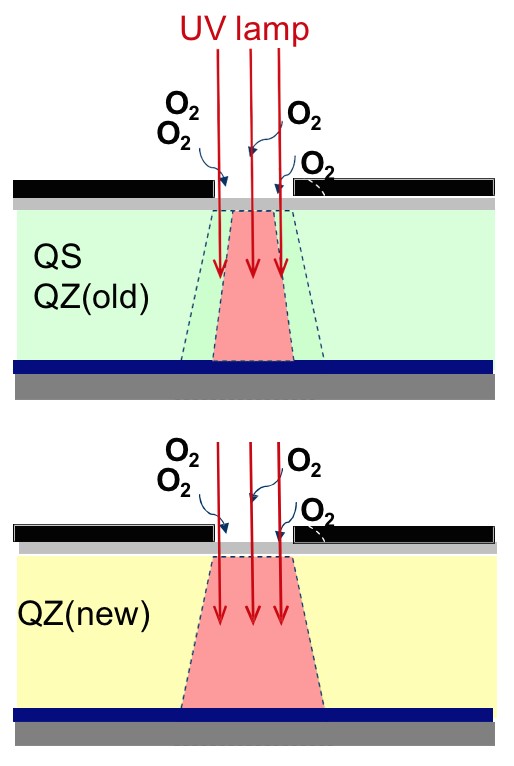 Oxygen effect on a dot in a standard plate and QZ plate with an oxygen barrier.

No additional treatments or complicated equipment are necessary to obtain a flat top dot I can already hear the voices of my industry colleagues that such materials are already available in the market. Indeed…

However, what is the most innovative in this plate is the construction of the polymer part. It consists of several layers and, as I already mentioned about the oxygen barrier, subsequent layers cause the polymer to be exposed with different sensitivity depending on whether it is backlight – forming the base or the main light responsible for the mapping of printing elements. We know from experience that, let’s call it “old”, QZ114 plate also could obtain a flat-top dot, but it was characterized by a larger dot gain in printing at the same time. Combined with high ink transfer on the substrate, this gave an effect of the too strong and clear line in tonal transitions.

An example of a tonal transition with a large dot in printing as the minimum dot.

QZ New Generation Plate due to its diverse sensitivity allows obtaining a stable and always the same effect in the process of back exposure – the thickness of the base. Thanks to this, even imperfect exposing units, with large surges of exposure energy and power drops, can repetitively create a plate base with the same properties. 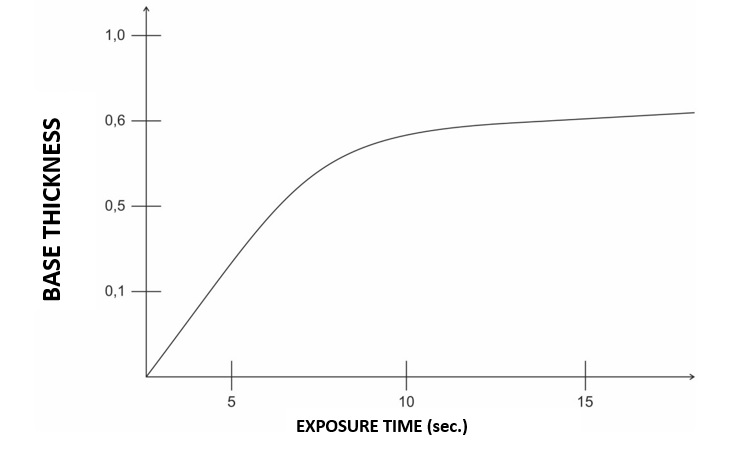 Back-light chart and polymerization curve of the base layer.

At the same time, when the plate is moderately sensitive, during backlight exposure, the upper layer responsible for building the dot tops is very sensitive. Thanks to this, the top of the dot is formed very precisely, while the layer separating the polymer from oxygen interference allows obtaining a dot with the characteristics of a flat top.

Dot profile – taking into account the stable base for the dot.

The multilayer structure of the polymer causes that we can obtain the smallest dots in the high lights on the plate without additional treatments while maintaining a wide gradient even in the shadows. 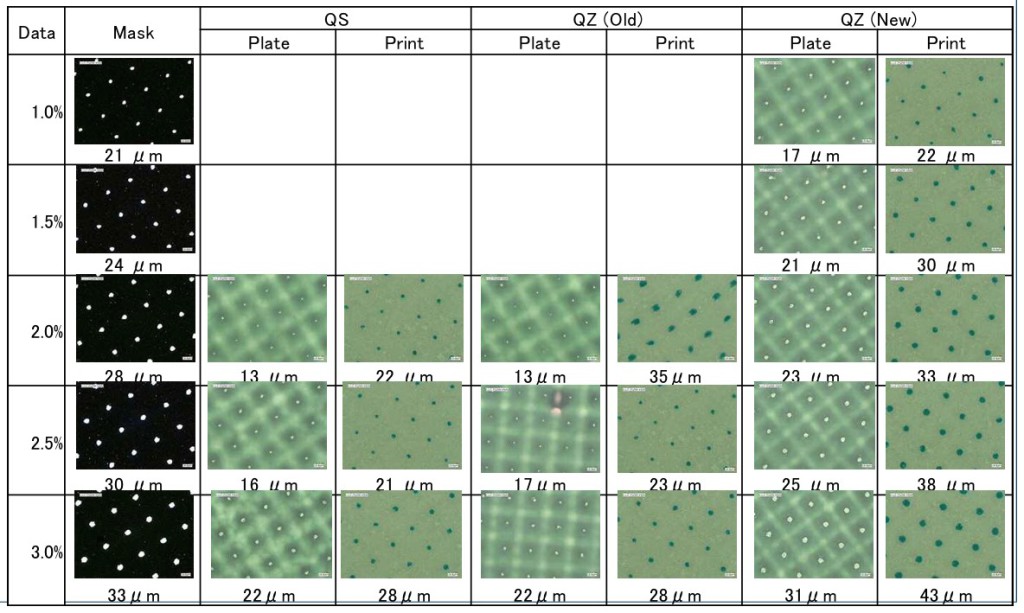 Exemplary gradient reprint from 1 to 100%

The TOYOBO water-wash flexographic plate is a mix of benefits in the form of short processing time, ecology and reduction of electricity costs. Our customers also value its high ink transfer and ease of use. QZ’s new generation plate complements the above advantages with a very stable and flat top printing dot. The mapping of minimum dots assuming that they are stable and long-lasting in the long run makes it the right product for very demanding customers. Especially for printing houses that, in addition to ecology, focus on fast response time to customer needs and choose printing plates that guarantee high-quality parameters of the printing…

Expert, experienced photopolymer plate processing and flexographic printing practitioner. Vice President and co-owner of the company Print Systems. Responsible for the implementation and maintenance of technology based on water-wash plates by the Japanese company Toyobo. He advises and cooperates with all the major labels and packaging printers in Poland, Italy and in the Balkans. 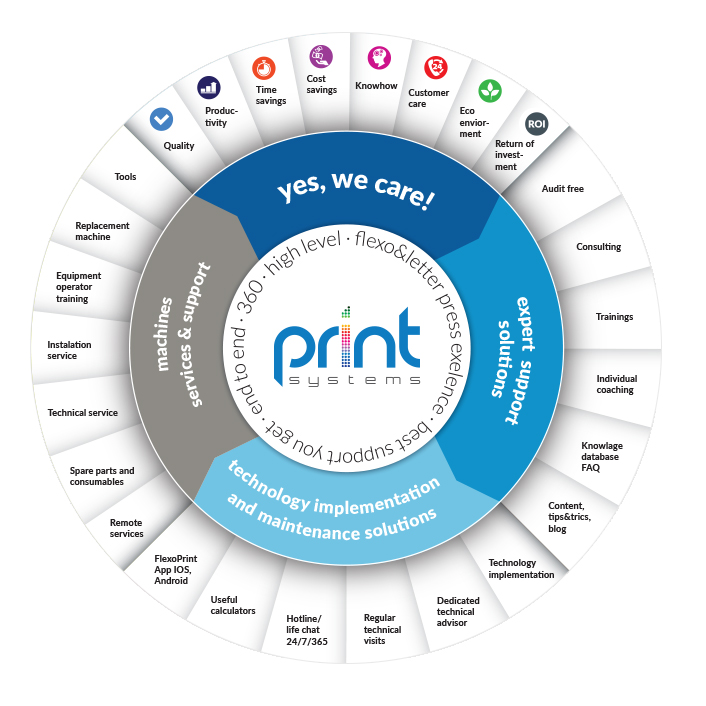 Use professional calculators that simplify everyday tasks. It is all available in your smartphone now!

Thank you for your message. It has been sent.